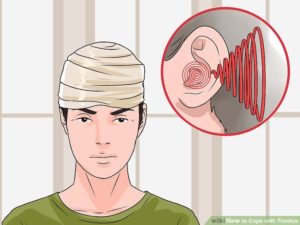 Tinnitus, although often described as “ringing in the ears”, can also present as a buzzing, hissing, seashell sound, roaring, humming or pulsation. It might be constant or intermittent (on and off). It might be loud at times or barely noticeable at other times. generally, tinnitus is most noticeable when the environment is quiet. Head noise or tinnitus may or may not be associated with hearing impairment, but most people with hearing loss (80%) have tinnitus as one symptom. Only about 5% – 10% of people with tinnitus have normal hearing on an audiogram.

Most people who experience tinnitus are not bothered greatly by it. But up to 20% of people with tinnitus are severely disturbed by it.

In many cases, the reason of tinnitus is considered idiopathic (no known cause). There are two forms of tinnitus: objective and subjective. The most common form of tinnitus is subject tinnitus. This means that you hear the sound but others cannot. Tinnitus that can also be heard by an observer is called objective tinnitus.

Tinnitus is a symptom, not a disease and there’s not one specific treatment to cure it. If you have tinnitus, it’s important to see an otologist (ear doctor) for a total evaluation to determine the reason of the tinnitus. This examination will help identify any underlying physical problems that might be treatable either medically or surgically.

There may be several treatment options for tinnitus. Immediate treatment can be performed, for example, to remove impacted earwax or drain fluid from the middle ear, which may correct the associated hearing loss and cure the tinnitus. In most other cases, the goal of treatment is to decrease your perception of the tinnitus so that it is less bothersome. These treatment options include hearing aids, tinnitus maskers, medications, relaxation techniques, tinnitus retaining therapy (TRT), and cognitive-behavioral therapy.