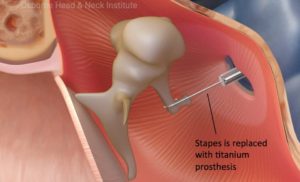 ‘Otosclerosis is reason by an abnormal growth of bone in the ears, which causes hearing loss. In most cases, a surgical operation will restore the hearing.

Otosclerosis has to do with the three small bones in the middle ear, more specifically the stapes. A part of the bone will grow abnormally and this bone growth will stop the stapes from vibrating usually in response to sound. In its early stages, the sufferer will not be affected.

Otosclerosis is a disease of the ear in which abnormal growth of bone interferes with movement of the stapes bone, leading to a progressive loss of hearing.

Ostosclerosis is one of the most ordinary types of acquired hearing loss. It’s also twice as common among women as men. This is thought to be because of hormonal influences on the disease. Pregnant women with otosclerosis sometimes experience a rapid drop in hearing.

The treatment options for otosclerosis are either to observe and monitor your hearing loss, or to wear a hearing aid or to have surgical correction. The surgical procedure performed to correct otosclerosis is called a stapedectomy, which is an elective day surgery procedure. You can return to work in seven to ten days depending upon your work requirements.

Concept of good quality health care is shifting from humanity care to Morbidity care. ENT specialist has 3 of the 5 unique senses, namely Hearing, Smell and Taste under its care. The 6th newly included special Sense of Balance is also connected to the ear. Care of hearing, taste, smell, voice and balance care come under ENT. So morbidity and wellness care is unfinished without ENT care