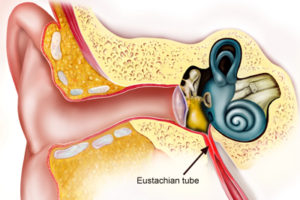 Eustachian tubes are little tubes that run between your middle ears and the upper throat. They are responsible for equalizing ear stress and draining fluid from the middle ear, the part of the ear behind the eardrum. The Eustachian tubes are generally closed except for when you chew, swallow, or yawn.

The Eustachian tube is the narrow channel connecting the back of the nose with the middle ear space. It lies deep within the head and is made of cartilage and bone. Dysfunction of the Eustachian tube can result in ear fullness along with associated discomfort, popping or crackling sounds, sensation of force and diminished hearing.

Chronic OME may result from continued and persistent Eustachian tube blockage or from thickening of the fluid such that it can’t be fascinated or drained through the Eustachian tube.

Treatment of OME is initially medical and generally directed towards treatment of the upper respiratory infection or allergy attacks. When the middle ear fluid is infected (acute otitis media), antibiotic treatment is needed. If antibiotics don’t clear the ear, a surgical procedure may be necessary. These include myringotomy with or without insertion of a ventilation tube. Like acute OME, treatment of chronic OME may be either medical or surgical, such as antibiotics, allergy treatment or myringotomy with insertion of a ventilation tube and, at times, adenoidectomy.