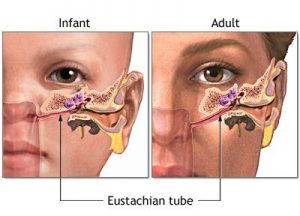 Chronic otitis media (COM) is a long-lasting infection of the middle ear that often produces a perforation in the tympanic membrane (eardrum) and can lead to damage of the ossicles (middle ear bones) or tissue membrane of the middle ear, producing hearing loss.

An infection in the middle ear can reason the eardrum to rupture, resulting in a perforation. With acute otitis media, this perforation generally heals on its own.  If it doesn’t heal, a hearing loss occurs, often associated with head noise (tinnitus) and ear drainage. When a chronic infection is present, it’s less likely that a perforation can heal.

Middle ear infections often result in the formation of tympanosclerosis (scarring) in the middle fibrous layers of the tympanic membrane. The tympanosclerosis stiffens the eardrum, often affecting its movement, and if it spreads to involve the three bones of hearing, hearing loss will happen.

Chronic otitis media and perforation of the eardrum can also lead to formation of cholesteatoma. This results from the movement of skin from the ear canal and outside of the eardrum down through the hole in the eardrum into the middle ear space. Cholesteatoma is a compilation of skin trapped in an area where the skin does not belong and mostly requires surgical correction.

Infections of the middle ear can reason hearing impairment and discharge from the ear. Occasionally, symptoms of more advanced chronic ear disease are present such as pain, dizziness, or facial weakness.

Based on your symptoms and findings, additional tests of hearing and balance and radiographic studies such as a CT scan may be necessary.

Treatment options offered for chronic ear infection include medication, such as ear drops to treat ear drainage, and surgical treatment, such as myringoplasty, mastoidectomy, and tympanoplasty.