An auditory brainstem implant (ABI) is a little device that is surgically implanted in the brain of a deaf person whose auditory nerves is lacking or injured. The auditory nerves conduct the sound signals from the ear to the brain. The implant facilitate otherwise deaf people to have a sensation of hearing.

The auditory brainstem implant (ABI) was developed to restore some hearing to people in the situation where cochlear implants cannot be used due to injure to the hearing nerves. In most cases, these are people with neurofibromatosis type II (NF2) who have tumors in both ears. As a result of the tumors or their surgical removal, hearing is lost and the hearing nerves are destroyed. The ABI bypasses the damaged hearing nerves by placing electrodes on the next centre up the pathway to the brain, the cochlear nucleus complex in the brainstem. 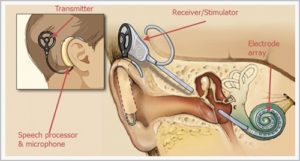 The ABI is usually placed at the time of surgical removal of the acoustic neuroma tumor. It can be placed during the first tumor removal to give time to adjust to the sound before losing all of the hearing in the other ear. The tumor is removed using the translabyrinthine approach. After removal of the tumor, the ABI electrode array is placed on the cochlear nucleus and tests for electrical auditory responses are performed. These tests are helpful in determining whether the patient will be capable to hear sounds from the device.

The overall hearing ability of people who have received ABI’s is usually similar to that of people with earlier simple cochlear implants. Eighty-five percent of people who have received an ABI do have auditory sensations. Auditory Brainstem Implants may be used in children and adults without NF2 who have sensorineural hearing loss who are not candidates for cochlear implants (CI). Reasons for such hearing loss may include absence of the cochlear nerve, absence of the cochlear itself, ossification from meningitis or trauma.