Vascular Anatomy of the Neck

Vascular Anatomy of the Neck 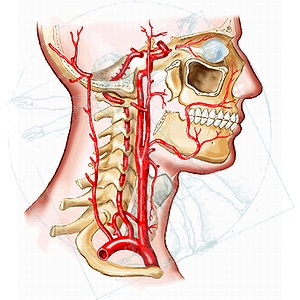 The neck holds the vital arteries transmitting blood to the brain, head and face. It also transmits the veins which drain the deoxygenated blood from the brain, head and face and return it to the right side of the heart. The neck also includes the cervical spinal cord, as well as some significant cranial nerves. Some of these structures travel together in a facial sheath called the carotid sheath. The carotid sheath carries the common and internal carotid arteries, the internal jugular vein, the vague nerve, some lymph nodes, carotid per arterial plexuses and the carotid sinus nerve.

Near the bifurcation of the general carotid arteries, there are two important receptors, the carotid sinus and the carotid body. The carotid sinus is a bar receptor which senses the pressure in the carotid artery system and transmits information to the brain about the blood pressure in order to maintain blood pressure homeostasis. It is located at the beginning of the internal carotid artery as a small dilatation. The carotid body is a small lump of tissue that lies on the medial side of the ordinary carotid bifurcation. Its role is to monitor the levels of oxygen in the blood; it relays information about blood oxygen to the brain. In accordance with the changes sensed by the carotid body, the brain responds by changing the rate of breathing.

The next branch from the outside carotid artery is the lingual artery, which arises close to the middle pharyngeal constrictor muscle. It supplies blood to parts of the tongue, and gives rise to the sublingual artery and the deep lingual artery. From its origin, it passes upwards and anteriorly. It travels deep to the hypoglossal nerve for part of its course.

The facial artery is an anterior branch of the external carotid artery. It generally arises above the lingual artery, but in some people, these arteries share a common origin. The facial artery gives off two important branches in the neck; the ascending palatine artery and the tonsillar artery, which supply the tonsils, the soft palate and nearby structures. It then travels underneath muscles in the upper neck and lower jaw, and pierces the submandibular salivary gland, which it supplies.