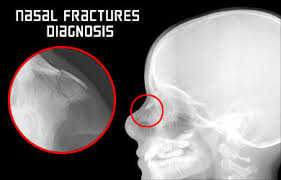 A break or crack in the bone or cartilage of your nose is a nasal fracture or nose fracture; mainly a broken nose. The area that divides your nostrils, known as the septum just over the bridge of your nose is the area typically broken. More often than not, the reason is due to sudden impact. Broken noses frequently happen with additional facial or neck injuries. Contact to the nose during a contact sport, fight, or sheer clumsiness are typically the cause. Since the nose is a sensitive area, absorbing any kind of trauma often leads people uncertain if the nose is broken or nothing as severe.

Symptoms of a Fractured or Broken Nose

If you are uncertain that you or your loved one has in fact broken their nose, compare your symptoms with the following symptoms of a broken nose:
– In or around your nose there is a noticeable pain.
– The nose show bent or crooked.
– Swelling around your nose or a swollen nose.
– Nose lose blood.
– A stuffy nose that will not drain due to blocked nasal passages.
– Bruising around your nose and eyes.
– Rubbing or grating sound or feeling when your nose moves.

If you are experiencing any of the following symptoms, be sure to get medical attention instantly
– extreme nose bleed that won’t stop.
– Clear fluids draining from your nose.
– Complicatedness breathing.
– A crooked or misshapen nose, Do Not try to make straight your nose yourself.
– If you suspect a head or neck injury.
Is My Nose Broken?

When you see your doctor under the suspicion of a broken nose, the doctor will administer a physical examination. Along with a visual assessment, we feel the nose for anomalies. We will often ask you to come back after three days once the swelling goes downward. In the event the nose     break was severe, you will undergo either a CT scan or X-Ray to determine the extent of the injure.

How to Reduce Nose Swelling After Injury

A broken nose that is not too excessive can be treated at home before seeing a doctor instead of the emergency room. Sit down and lean forward while breathing through your mouth if your nose is bleeding. Elevate your head to decrease throbbing pain, if your nose is not bleeding, apply a cold compress to your nose for 15 to 20 minutes 3-4 times a day to decrease swelling. To relieve the pain, take Tylenol, Ibuprofen, Motrin, or Advil to reduce the pain.

It is a lot easier to heal a broken nose within the first two weeks and to ensure there is no severe injure in the septum where blood can simply pool and need urgent treatment. Not all broken noses require extensive treatment but its best to consult a doctor to assess the extent of the broken nose.