What causes chronic nosebleeds in children?

What causes chronic nosebleeds in children? 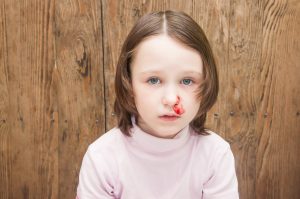 Nosebleeds can happen at any age, they are quite general in children. In fact, most parents will tell you that young children will experience one or more nosebleeds before they are teens. Even if this problem is commonplace, that doesn’t make it any less scary for parents. After all, it can look like a lot of blood, and if the child swallows any of it, they can end up vomiting.

So, if your child has a nosebleed, it would help immensely if you knew what may be causing it. Of course, chronic nosebleeds should warrant a visit to the doctor, but you may be capable to get an idea of what is going on immediately based on your child’s situation. Here is some of the most common reason of nosebleeds in kids.

Children generally get colds. The virus is so general that many kids get sick more than once a year. It doesn’t help that little ones will wipe their nose with their hands and immediately handle toys. The concept of keeping germ free is usually lost on children.

When children get a cold, the tender tissues inside of their nose can become inflamed and swollen and this can result in a nosebleed. The same can be true of allergies. Hay fever especially can reason the tissue within the nose to become inflamed and irritated.

If you live in low humidity areas, then nosebleeds can come out of seemingly nowhere. That’s because the dry air also dries out the lining inside of the nose. As a result, the lining becomes irritated and spontaneous bleeding may happen. In these cases, it may make the most sense to purchase a humidifier for your child’s room.

As you probably already know, children do tend to pick their noses, and more than one child has even stuck something up a nostril. This type of activity can reason enough traumas to lead to a nose bleed. Other trauma that could result in the same problem includes blowing the nose too hard or getting hit in the nose by an object like a ball.

There are certain situations of the anatomical makeup within the nose that can lead to chronic nosebleeds. For example, a deviated septum, which means the center portion of the nose is not even, can lead to the problem.

Additionally, if there are abnormal growths inside of the nose, such as polyps, then nosebleeds may be more common. Usually, these growths are not malignant, but they should be checked by an ENT specialist.

If a child has a situation that makes blood clotting difficult, this can make them more susceptible to nose bleeds. One common situation is hemophilia. In addition, certain medications can actually thin the blood, making it more difficult to clot as well. One of these is Aspirin.