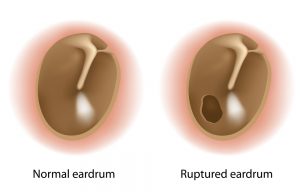 The eardrum, otherwise known as the tympanic membrane, divides the ear canal from the middle ear. A perforated eardrum happen when the eardrum ruptures, leaving an opening between the middle and outer ear. This can be problematic.

A ruptured eardrum usually results from injury or trauma, or following a chronic infection. Very loud and sudden noises can reason the eardrum to perforate. This is often associated with an acute, sudden onset of pain.

Another possible reason of eardrum perforations is from a chronic ear infection, such as otitis media. Otitis media is a fluid buildup in the middle ear cavity. The middle ear is generally filled with air, and with an accumulation of fluid or pus, pressure is enlarged on the eardrum. If the pressure against the eardrum is too great, it may perforate. Chronic otitis media may also weaken the eardrum over time and leave it more vulnerable to rupture. Children are more likely to suffer from a perforated eardrum due to chronic infection.

The use of cotton buds to clean your ears may also pierce the eardrum if pushed in too far, causing it to rupture. This is why eardrops are a much safer option when cleaning your ears.

Flying with a cold may also block the Eustachian tube, leading to a build-up of pressure in the middle ear, which enlarges the risk of rupturing the eardrum whilst flying.

Dealing with a Sore Throat in Children

Dealing with a Sore Throat in Children

If your child has a sore throat, your first impulse is probably to pack them up and head straight to the ear, nose, and throat (ENT) surgeon. Hold on just a moment, though. A sore throat could be Strep throat, but it could also be a symptom of a cold or sinus infection. Before you make an appointment with your Local Doctor or Pediatrician, look for other symptoms and see if this is just a viral infection that can be treated with rest and lots of fluids or whether it’s time to see the doctor.

Seeing a Doctor for a sore throat in children

Sore throats can be reason by viral infections, such as a cold or cough. Your child may experience a sore throat toward the end of suffering from a cold or an allergic reaction. This occurs when the sinuses are draining, and your child has swallowed a lot of mucous over a period of a few days.

If a sore throat happen in conjunction with a cold or cough, and there is no fever, you will probably not be helping your child out with a trip to the doctor. Instead, it is time to put them to bed and make sure they drink a lot of fluid. You might want to get a humidifier for their room for this time to moisten the air they breathe as they sleep.

Making an appointment with an ENT Surgeon

If the sore throat seems to come out of nowhere, particularly if your child has a fever, make an appointment to see your Local Doctor or Paediatrician. Other signs that a sore throat is probably a bacterial infection that needs treatment (with antibiotics) include:

If your child exhibits any or all of these symptoms, they may have Strep throat, which will not go away on its own. Untreated, Strep throat can develop into rheumatic fever, which can be dangerous. Fortunately, it can be take care of with a simple round of antibiotics 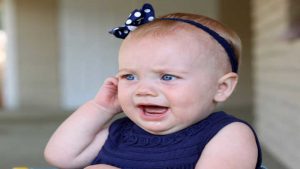 Some children fight back with earaches off and on throughout their childhood, and chronic ear infections often become a problem enough that parents may regard as treatments such as surgical insertion of tubes to allow the ears to drain. However, many parents do not have experience with earaches and may be unsure of what to do if their child becomes unwell.

What causes an earache?

In most cases, a child with an ear ache has an ear infection. However, if the child inserts something into their ear and it gets trapped, this could lead to pain as well. However, if you have ruled out foreign objects, then infection is the likely culprit?

Symptoms of an ear infection include:

Therefore, if you notice that your child has an earache, then they likely have an ear infection as well. A doctor will need to prescribe treatment.

Since a children’s ear infection often comes along with a fever, you may need to keep your child home until the fever has cleared up.

How to ease an earache

If your child develops an earache, there are some things you can do between now and when you visit the doctor to help ease the pain.

If your child has an ear ache, do not put cotton in their ears. This can actually trap any pus or drainage, and this can further irritate the ear canal, making the situation worse.

Earaches are rarely serious, but they do generally mean an ear infection, which necessitate a trip to the doctor for antibiotics. As long as you keep an eye on your child for severe symptoms, then an ear ache should go away fairly quickly with the appropriate treatment. In most cases, by the time the child is two or three years old, the number of earaches should drop significantly 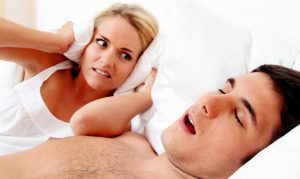 The noisy sounds of snoring happen when there is an obstruction to the free flow of air through the passages at the back of the mouth and nose. This area is the collapsible part of the airway where the tongue and upper throat meet the soft palate and uvula. Snoring happen when these structures strike each other and vibrate during breathing.

In children, snoring may be a sign of problems with the tonsils and adenoids. A chronically snoring child should be look at by an otolaryngologist, who may recommend a tonsillectomy and adenoidectomy to return the child to full health.

Why is snoring serious?

Socially – Snoring can make the snorer an object of ridicule and can reason the bed partner to experience sleepless nights and fatigue.

Medically – It disturbs sleeping patterns and deprives the snorer of adequate rest.  It may be a sign of obstructive sleep apnea (OSA), which can lead to grave, long-term health problems.

How is heavy snoring evaluated?

Heavy snorers should seek medical advice to ensure that sleep apnea is not a problem. Heavy snorers contain people who snore constantly in any situation or who negatively impact a bed partner’s sleep. An otolaryngologist will give a thorough examination of the nose, mouth, throat, palate, and neck, often using a fiber optic scope. An examination can reveal if the snoring is reason by nasal allergy, infection, nasal obstruction, or enlargement of tonsils and adenoids.  A sleep study in a laboratory or at home may be necessary to determine if snoring is due to OSA.

All snorers with any of the following symptoms should be evaluated for possible obstructive sleep apnea: