Sinus Pain: Sinus infection, or something else?

Sinus Pain: Sinus infection, or something else?

Looking for Ear, Nose and Throat care tips? Our doctors and staff share the latest developments in our blog.

Millions of people suffer from sinus pain; often explain as facial pain and anxiety over their nose, under their eyes and into their cheeks. This leads to millions of visits to their primary care supplier or urgent care, where they are often diagnosed with sinusitis and given antibiotics.

What if they actually did not have a sinus infection? What if the pain came from something else?

What if they were actually suffering from a variation of a migraine headache?

Well, the past three years several studies looked into this very issue. And what each of them found was astounding:  Over 80% of people who there with “sinus pain” DO NOT have a sinus infection. In fact, the same percentage of people responded totally to migraine treatment, effectively proving the fact the sinus pain was of migraine origin. Four hours after being treated for a migraine, 80% of the patients were sinus pain free. No antibiotics. No decongestants. No nasal spray.

According to one study, the average time between seeing their first medical professional and getting properly diagnosed was over 7 years. One person in their study suffered 38 years, being treated with medicines and surgery for a presumed sinus situation before finally being diagnosed with migraine sinus pain. In our practice, we see this as well. In fact, we had one patient who was treated with over 40 antibiotics before coming to see us and getting properly diagnosed and treated.

How can a person tell if they are suffering from a migraine process or a sinus condition? 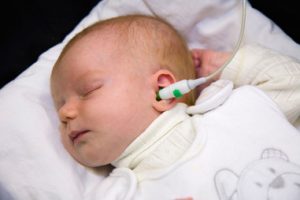 Around two to four of every 1,000 children in the United States are born deaf or hard-of-hearing, making hearing loss the most frequent birth disorder. Many studies have shown that early diagnosis of hearing loss is crucial to the development of speech, language, cognitive, and psychosocial capabilities. Treatment is most successful if hearing loss is identified early on, preferably within the first few months of life. Still, one in every four children born with serious hearing loss does not receive a diagnosis until 14 months old.

When Should a Child’s Hearing Be Tested?

The first chance to test a child’s hearing is in the hospital shortly after birth. If your child’s hearing is not screened before leaving the hospital, it is recommended that screening be done within the first month of life.  If test results indicate a possible hearing loss, get a further evaluation as soon as possible, preferably within the first three to six months of life.

In recent years, health association across the country, including the American Academy of Otolaryngology – Head and Neck Surgery, has worked to highlight the significance of screening all newborns for hearing loss. These efforts are working. Recently, many states have passed Early Hearing Detection and Intervention legislation.  A few other states regularly screen the hearing of most newborns, but have no legislation that necessitates screening.  So, check with your local authority or hospital for screening regulations.

Signs of Hearing Loss in Children

Hearing loss can also happen later in childhood. In these cases, parents, grandparents, and other caregivers are often the first to notice that something may be wrong with a young child’s hearing. Even if your child’s hearing was tested as a newborn, you should continue to watch for signs of hearing loss, including: